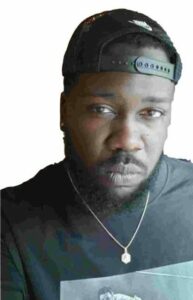 Although Blair didn’t have an extensive criminal background, there was an isolated incident in 2018 for which he was convicted of a misdemeanor. This misdemeanor resulted in not only a jail sentence and supervision, but it also required Blair to work on better coping strategies with conflict resolution. He used this time as an opportunity to learn and grow. It was a valuable lesson, one that will stay with Blair for the rest of his life.

Blair was introduced to Goodwill through Project Now, a program for post incarceration reintegration, after hearing about an opportunity to obtain his Commercial Driver’s License (CDL). He reported that prior to enrolling, his wife had strongly encouraged him to obtain this license, however, the class was costly and figuring out how to make that happen was challenging. A co-worker of Blair’s (another Project Now participant) told him about the CDL training that Goodwill offers through a federal Department of Labor grant. Blair grabbed a hold of that opportunity and followed up with his Career Coach, Leslie, from Goodwill. Once eligibility was determined, Blair was enrolled in Project Now and began his first training shortly thereafter. Even though Blair had the added challenge of having to coordinate this around COVID, as all local Secretary of States were closed, he completed a customer service training and earned a nationally recognized credential in retail/sales/customer service. Additionally, he finished all the prep work necessary to start his CDL training. Luckily though, he had already passed one exam prior to the shut-down. As soon as the shelter in place was lifted, Blair immediately tackled those last two exams and passed! During the COVID shut down, he focused on his three-week training at West Michigan CDL. He showed up, ready to work and learn every day. Upon completing his training, Blair took his driving test and passed with flying colors as a certified CDL driver.

Blair is now working for Pearson Foods as a local truck driver. As stated by his career coach, “It’s been an absolute pleasure working with Blair. Project Now is tailor made for folks just like him, who are determined to attain their career goals. Blair’s story is a successful one because he followed the necessary steps from A to Z and was able to utilize resources along the way.” Blair is now in a ‘follow along’ phase in Project Now, which allows for him to focus on his career, while his career coach remains available and ready to assist with resources, should he require any.