Before coming to Goodwill, Dexter struggled with grief, alcohol use disorder, and homelessness. Luckily, after a tough conversation with his sister, Dexter realized he needed to get help and turn his life around. After he completed an intensive treatment program and became sober, he was ready to seek out employment to start supporting himself. He was referred to the Goodwill of Greater Grand Rapids’ Achieve program.

While in Achieve, Dexter completed small group and large group workshops, as well as one-on-one meetings focused on employability, goal setting, barrier reduction, stress management, job search strategies and more. The set schedule with Achieve mirrors what a work schedule could be, and Dexter found this very helpful in preparing him for employment. “Achieve was great. It was just what I needed having a set schedule” said Dexter. Achieve program coordinator Karen said, “Dexter stayed committed to the journey and the process, even when it involved unexpected challenges and changes.” 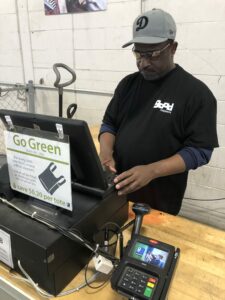 The Achieve program set up a transitional work experience for Dexter at the local recycling facility. He went through the program and after 90 days, he was hired in as staff. Dexter moved up into the line leader position before transitioning to Goodwill’s Outlet Center as an equipment operator. He was then promoted to store lead in January 2019. Dexter is responsible for providing customer service, meeting production goals, and essentially running the store in the absence of a manager. Karen said, “Dexter consistently demonstrates a positive attitude, responsibility, and determination which allows him to stay level-headed and act as a role model for others.”

Sober for over 3 years, his manager stated, “Dexter has overcome a lot and worked hard to improve himself.” Dexter expressed appreciation for the support of the Achieve program staff and said he stays in contact with them. In the future, Dexter would like to use his Bachelor’s in Criminal Justice degree and work as a job coach to help others overcome hardships to reach their goals.