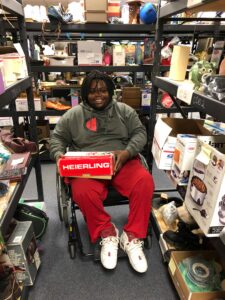 Homeless and recently graduated from high school, Josh came to Goodwill of Greater Grand Rapids looking for stability. He was bouncing from shelter to shelter, searching for a sustainable job and steady housing. That’s when he heard about Goodwill’s ASSETS program, a program for young adults with disabilities transitioning from school into employment.

It wasn’t an easy start, external factors were taking a toll on Josh. He felt dejected and was beginning to disconnect. Josh stated, “At one point I got really down with everything in my outside life. That’s when my career coach started to fight for me personally. Reaching out in different ways and eventually we connected. I was motivated again. I was reminded that there is more to life than giving up and that’s what I had been doing, just giving up.”

With this new drive, Josh began to reapply himself. He sent his resume to several organizations, but with little work experience, he wasn’t having much success. Josh was feeling like he was hitting a wall. That is, until Josh’s career coach set up a temporary work experience within Goodwill’s ecommerce department, ShopGoodwill. The paid work experience was three months long to help Josh build his resume.

Not only did Josh gain skills and experience, his positive attitude and work ethic led to a job offer from Goodwill. It has now been two years since Josh started working in the ecommerce department. He recalled, “At the end of my temporary position, my bosses sat me down and told me I was a perfect fit for the department. Thanks to Goodwill, I received so much help. It was a long process. I was coming from a distance and there were times my career coach had to pick me up, so I could make it to certain places. They even gave me bus tickets. I can honestly say to this day, Goodwill has been one of the best things that has happened to me.” Ecstatic to be fully employed, Josh was able to help his family get a home and out of their previous situation. 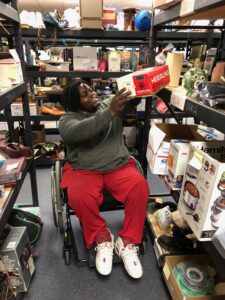 The ASSETS program provided him with the guidance and connections to succeed. Remembering this time, he told us, “They were always working with me. I found the housing on my own, but they were checking and asking if I needed anything. It actually gave me the inner strength to keep going.”

Josh now works in the jewelry division of the ecommerce department. His career coach boasted, “Josh is a person who makes everyone’s day better simply by his positive attitude and kindness. He has shown me that no barrier is too big to accomplish.” His supervisors, agreeing with this, told us, “He does every task he’s given extremely well and maintains a great attitude while completing them. We are very lucky to have him.”