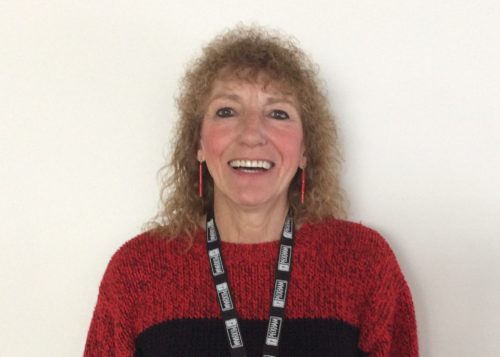 At almost 60 years old, Melissa was laid off after 15 years with her previous company. With no GED, college or technical training and no cartilage between her hips causing severe health problems, Melissa was feeling down and out. After sending out over 200 applications with no success, she was desperate. Her husband was employed but with health problems of his own and no health insurance, she needed to find a position compatible with her body’s needs, paying a sustainable wage, and including health benefits.

One day, Melissa discovered Goodwill had a technical training program that could lead to employment in a call center.  The wage was around $20 per hour and it included benefits.  This certainly sounded like a dream come true, but could she meet the requirements?  At her old job, she became pretty good with Microsoft Office but she never gave much thought to how computers work or how to troubleshoot issues. Melissa, being a tough and persistent person, was not willing to let these challenges stop her.

She was accepted into the program with Goodwill’s provided support and help with getting proof of disability. She soaked in a tremendous amount of information over the course of a 15-week training.  Finally, it was time to take the first of two exams.  After two attempts, she successfully passed her first exam, however, the version of exams she was working on would soon be replaced with a new one.  She focused all her energy on passing the second exam before this version was retired.  She took the second exam twice, but missed passing by a little bit each time. Unfortunately, before she could try again, the new exam was implemented. Melissa was devastated.

Goodwill contacted Melissa and encouraged her to go through the class again. The environment at Goodwill was very supportive and provided multiple tools to help her succeed. Once she learned the new concepts, it was time for her to take the exams again. She not only passed the first exam after one try, but she passed the second exam on the first try as well.  It was a very emotional moment, which included the biggest smile imaginable, tears of joy, and utter relief.

When I was feeling like I wasn’t doing good enough, they pumped me up and told me you can do it. And by golly, I did!

Soon after, she was hired into the call center position for which she had been striving.  The work was challenging but she studied very hard in preparation for this position, which prepared her to handle all the tasks that were designated to her. Melissa is now able to work from home 4 days a week, which helps limit movement and pain for her disability. Both her and her husband now have health insurance. Melissa loves her job, they care about her as a person and she has great co-workers. Melissa is so thankful with how much her family’s lives have improved since discovering the training program at Goodwill, she never would have guessed things could have turned out so well.

I tell everybody about Goodwill, I want them to know that if they have something they need, go talk to Goodwill, they are unbelievable.